The 7 Habits of Highly Effective Teens 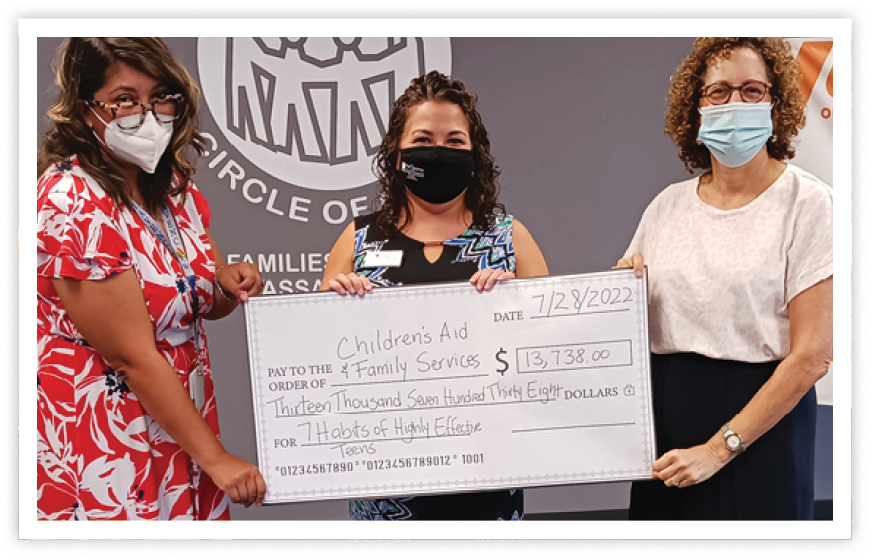 “It provided information that I can apply to the rest of my life,” said one teen of the agency’s exciting new initiative, The 7 Habits of Highly Effective Teens. That statement summarizes the goal of substance misuse prevention: giving people skills they can use for the rest of their lives.

Teens are confronted with many challenges, including substance misuse, and 7 Habits helps them understand their choices, and their motivations for making them. The Center for Alcohol and Drug Resources, a program of Children’s Aid and Family Services, has been providing prevention services for more than 40 years, and 7 Habits continues The Center’s tradition of helping teens to avoid future substance misuse.

“The feedback has been very positive,” says Stephanie Drag, Director of School and Family Services. “This is an interactive program and includes game-based learning and demonstrations, and also self-reflection skills. Through these skills, the program addresses protective factors against substance misuse, including self-image, peer pressure and resistance, goal-setting, communications, and positive relationships with adults.”

The 7 Habits of Highly Effective Teens program was created by Sean Covey to accompany the book with the same title, and is based on the concepts of the bestselling The 7 Habits of Highly Effective People, authored by Covey’s father, Stephen Covey. This program currently targets teens, 13 to 17, in Passaic, Bergen, and Middlesex counties and is expanding to new schools and communities. The curriculum spans eight days: an introductory day followed by a habit each day for seven days.

Habit one, for example, is Taking Responsibility for Your Life. “This is a concept many people struggle with, understanding they have the final say in all their decisions, and on day one we’re using strategies to remind teens of this truth,” says Stephanie. The habits build on each other and foster behavioral change and improvement, from the inside out.

Each of the 7 Habits modules are taught after school or during evening hours in a community-based location, such as a Family Success Center, Family Support, or faith-based organizations. Each cycle serves 8-10 youth, and participants receive The 7 Habits of Highly Effective Teens book and a workbook.

For the coming school year, 7 Habits has been funded by the Community Resource Development Fund and the Circle of Care in Passaic County for two more cycles in community-based locations in Passaic County, including one cycle in the West Milford area. It’s significant that West Milford is included this year, as the rural nature of the area can mean fewer resources are available.

How effective is 7 Habits? After finishing the program, the teens complete an impact survey. The surveys show that 100% of the teens said the habits were useful, and 88% stated they had already started using at least one habit by the program’s end. “It’s an exciting, innovative idea, and we saw an opportunity to introduce a program that’s modern and had a different take on the problems teens encounter,” says Stephanie.

More articles from this newsletter issue…

The 7 Habits of Highly Effective Teens

A Summer of Fun